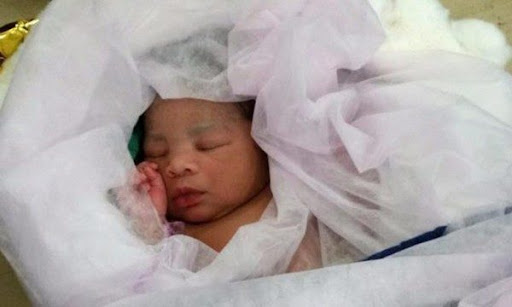 Francesca Marina Stephanie Samuel, the 24-year-old Nigerian migrant who was one of nearly 6,800 migrants rescued in the Mediterranean, and gave birth at sea, reportedly stated that Nigeria is the worst place to be. She made the statement during an interview with Reuters when asked about her ordeal. “I didn’t expect the baby, you know, but she just like, she just came,” Samuel said. “I just wanted to leave Libya. Italy is better than Libya and Nigeria is the worst.” Speaking on her baby’s future, she said,“God decides, not me … but I believe she will have a more good future in Europe.” Reports state that Samuel worked in Tripoli for two years as a housemaid to save up money to pay smugglers for the trip. However, the boat she was travelling in along with 90 others stalled after barely three hours at sea. In the course of rescue efforts, she was unconscious after suffering epileptic seizures and went into labor. She subsequently gave birth to a healthy baby girl, and named her Francesca Marina…
Post a comment
Read more 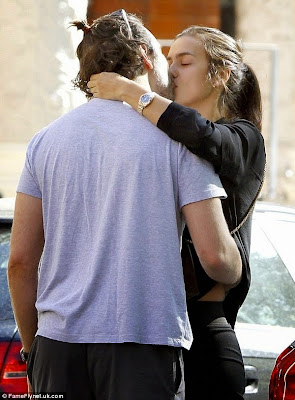 Bradley Cooper and his new girlfriend Irina Shayk can't seem to get enough of each other. If they do this in public, imagine them behind closed doors. *sigh*. The hot new couple were spotted sharing a passionate kiss during a day out in the UK two days ago. 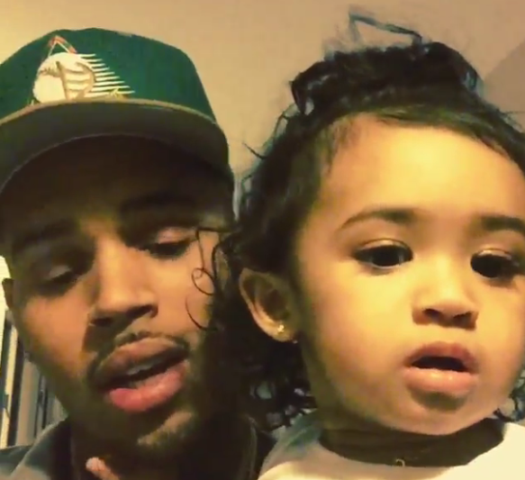 He actually shared a video of himself and Royalty and I screen-grabbed from it. He share the adorable video and wrote "She's in love with Nike'. That girl is so cute! 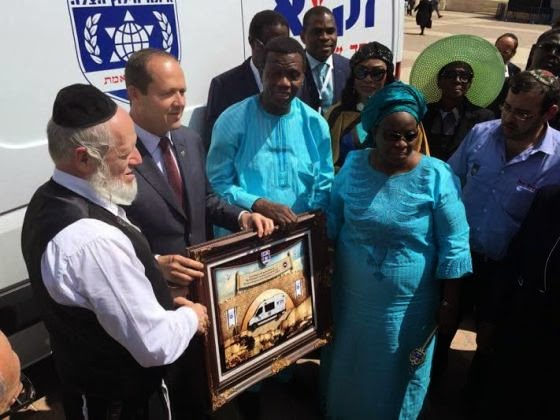 Pastor EA Adeboye yesterday May 13th through his church RCCG, donated an Ambulance to Zaka, Israel's disaster recovery organization. At the ceremony which held in Israel, the Mayor of Jerusalem, Nigerian Ambassador to Israel, a rep for Israeli Prime Minister were there.

According to a report by National Mirror, president-elect, Muhammadu  Buhari, has reportedly approved plans to have special courts for hearing tax evasion and corruption cases. The courts will be set up in FCT and will deal with the aforementioned cases involving companies, individuals and government officials. Chairman of the Anti-Money Laundering and Cyber Security Coalition at the National Assembly, Senator Aloysius Etok, reportedly disclosed the news yesterday. “We are confident that these courts will give accelerated hearing to tax evasion cases and other cases bothering on corruption,” he said. Etok expressed optimism that the courts, when established, will take off the burden of such cases from the regular courts and give them accelerated hearing. He said that members of the House of Representatives and coalition of senators have already gotten approval from the president-elect to set up the courts. He also revealed that the National Assembly is currently probing about 115 tax offen…
Post a comment
Read more

Man sneezes out toy in his nose after 44 years 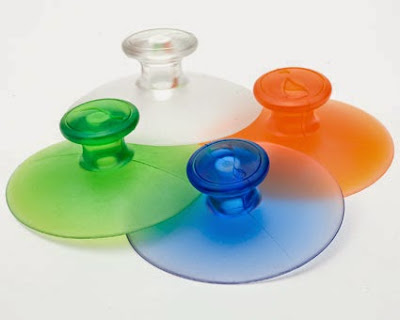 When Steve Easton was about seven years old, his parents noticed that the suction cup was missing from one of his toy darts, and they were worried he had inhaled or swallowed it. So they took him to the hospital, but doctors couldn't find anything. Yet for decades, he's suffered from sniffles and headaches he thought were a result of allergies.Now, 44 years later, it turns out his childhood doctors were wrong. In what must have been a powerful sneeze, accompanied by what he calls "a very uncomfortable sensation", the suction cup emerged from the now 51-year-old Easton's nose."I started a sneezing fit and it came out of my left nostril,” he says. “I thought, 'What’s this? Where the hell has this come from?' and pulled out this rubber sucker." Easton called his mom, who told him about the hospital visit which he had apparently forgotten.Doctors at the time said perhaps she was mistaken about her son inhaling the suction cup, she said. "I knew…
Post a comment
Read more 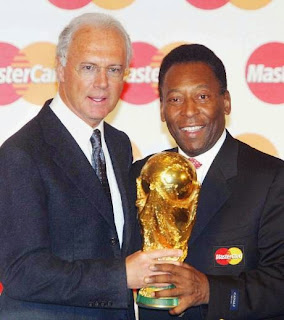 A very rare historical nude picture of football legends King Pelé and Kaiser Franz Beckenbauer (both men pictured above) in what seems to be a locker room in the 60s has made its way to the internet. Pelé is full frontal nude in the photo, while Beckenbauer (younger him pictured right) is also nude but backing the camera.
Beckenbauer is generally regarded as one of the greatest German footballers of all time and one of the most decorated footballers in the history of the game and twice won European Footballer of the Year. He is 69 now. While Pelé is widely regarded as the greatest player of all time and has been named World Player of the Century by many groups. He is 74 now. See the photo below... 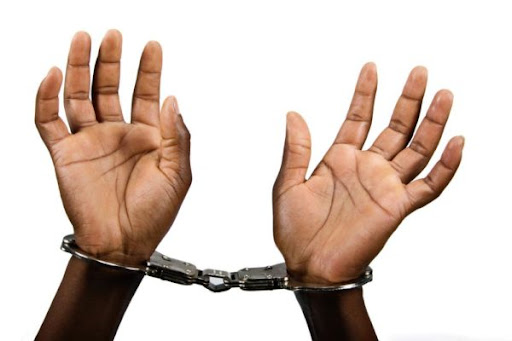 A Nigerian Student in Malaysia named Mary George Unazi was sentenced to death on Thursday for drug trafficking. Daily Independent reports that she committed the offense on May 10, 2011, when she was found with a bag containing  765.9gm of metamphetamine at the KL International Airport (KLIA). Unazi, 30, who attends a private college, was found guilty of trafficking after the prosecution proved its case against her beyond reasonable doubt. She failed to prove that the bag was not hers. She was subsequently charged under Section 39B(1)(a) of the Dangerous Drugs Act 1952 of Malaysia which carries a mandatory death penalty upon conviction.
Post a comment
Read more

A radio station named Radio Biafra operating from an unknown location in Rivers State has hit the airwaves. According to Daily Post, the station can be heard on 88.0 FM dial. The station is said to have just one radio personality named “Director,” and he often refers to listeners as “the indigenous people of Biafra.” Here is the report on the purported radio station: The anonymous Director, in one of his broadcasts, took a swipe at both the incumbent President and the President-elect for their recent activities. He consistently makes comments pitching the North and the West against the Niger-Delta, stressing people of the Niger-Delta were being “enslaved in Nigeria” which he refers to as a “zoo”. Taking a cue from the recent comments credited to the Oba of Lagos, HRM Rilwan Akinolu on the Igbo community in Lagos in the run-off to the Governorship election, the anonymous voice on Radio Biafra said words like ‘non-indigene’ should not be used in a country that claims it is united. “See ordina…
Post a comment
Read more 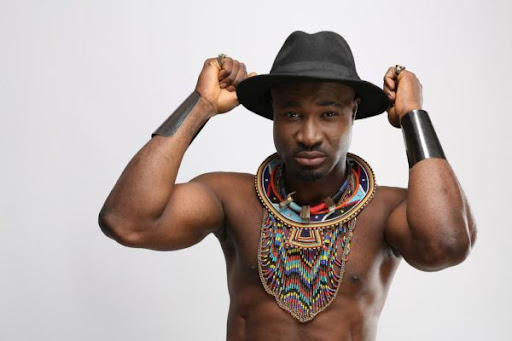 FiveStar music artist Harrysong has shared new photos, shot by TCD Photography, with a warrior and tribal theme. In the shoot Harrysong goes from leather jackets to African print outfits and accessories. While the overall theme is ‘Warrior’ there are definitely other elements in as well.
Post a comment
Read more 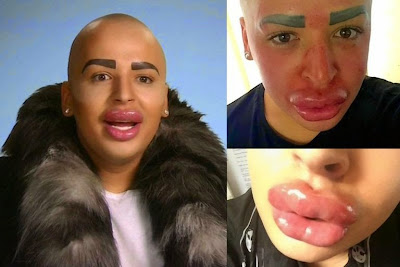 Jordan James is a 23-year-old Kim Kardashian superfan and lip filler addict who has spent more than £100,000 on plastic surgery just to look like his ‘idol’ Kim Kardashian.Jordan has spent £350 per shot on each of his 50 lip filler operations, even though he's been warned several times that his lips might end up exploding some day. More photos after the cut.
He also has eyebrow tattoos, chin, forehead and cheek filler, botox injections and has had laser hair removal.James who was brought up in Birmingham, has revealed in a TV show-Botched that he could no longer move his face as a result of the surgery and that his 4mm lip fillers are leaking.He said: ‘I can’t really move my face. I want just a little bit of definition and they just got bigger and bigger but any attention is good attention.‘I’m worried if they keep leaking I’m going to end up with small lips again.
Jordan asked 'Botched' doctors Terry Dubrow and Paul Nassif if he could have a nose job to give him a smaller …
Post a comment
Read more
More posts